UNLEASH develops next-generation ideas and partners young leaders with organizations at the forefront of innovation and global development.

Chemonics is a lead partner in the UNLEASH Global Innovation Lab, which gathers youth from around the world — known as “talents” — to transform personal insights into innovations and to build lasting global networks around the Sustainable Development Goals (SDGs). UNLEASH develops next-generation ideas and partners young leaders with organizations at the forefront of innovation and global development to bring their ideas to scale. Chemonics believes creating partnerships in the development community and beyond is critical to solving the world’s toughest problems. As UNLEASH’s lead scale partner, Chemonics has committed to sharing our 45 years of experience implementing multi-sectoral development programs in complex environments with UNLEASH’s community of global talents. As part of our support, Chemonics and UNLEASH co-created “UNLEASH+” — a pre-accelerator program to support returning UNLEASH talents who are ready to launch and scale their ideas. Partnering to Scale Solutions to Meet the SDGs

Chemonics has become Lead Scale Partner for UNLEASH, a global innovation lab that annually gathers 1,000 participants ages 20 to 35 — also known as “talents” — to collaborate on solutions to meet the Sustainable Development Goals. UNLEASH 2019 gathered 1,000 young talents, storytellers, and innovators in Shenzhen, China to collaborate on solutions to achieve the United Nations Sustainable Development Goals. At the innovation lab, Chemonics presented two teams from the lab’s UNLEASH+ pre-accelerator program — NovFeed and Permalution — with awards for their novel approaches to sustainability challenges that align with our work. Through a combination of monetary and in-kind consulting support, Chemonics is providing these teams with the methodologies, resources, and connections needed to help scale their innovations. Learn more about the awardees below: 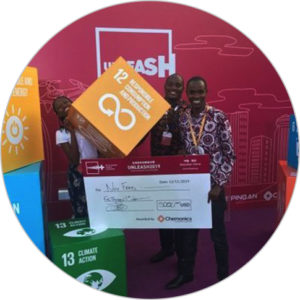 NovFeed scientifically formulates and produces a new, cost-effective fish feed based on indigenous, locally produced, and sustainable ingredients. The team aims to increase competition for fish feed, thereby reducing cost and increasing accessibility with the ultimate goal of making fish more affordable as a healthy food source. Learn more about NovFeed on Facebook, Twitter, and Instagram. 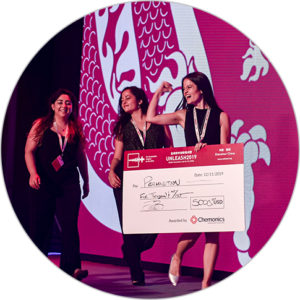 Permalution strives to introduce fog water harvesting as a new source of water for agricultural uses, ecosystem recovery, wildfire mitigation, and domestic and industrial use. The team has developed an approach to fog capture that has proven cheaper, more efficient, and safer than harvesting rainwater or groundwater. Learn more about Permalution Fog Catchers on Facebook, Twitter, and Instagram.

In addition to the UNLEASH+ awards, Chemonics also presented the Most Scalable Solution award — one of four special awards presented as part of the primary UNLEASH program — to Waste Awayers. The award includes ongoing in-kind support to help the team advance their idea. 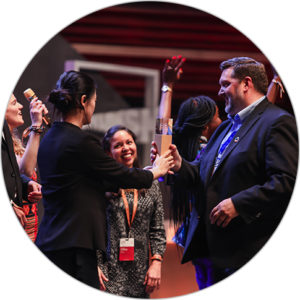 Waste Awayers are developing a biological solute to slow down the decomposition of fish as they are transported to merchants. By offering a preservation solution in local contexts where refrigeration might not be possible, the solution will reduce food waste and foodborne illnesses in Nigeria. Andrew Hassan reflects on the potential of virtual collaboration for solving intractable challenges and describes his hackathon team’s journey from problem to potential solution. The March 2020 UNLEASH Global COVID-19 Hack, was a two-day global digital hackathon designed to collectively address some of the challenges humanity is facing due to the spread of COVID-19.