July 13, 2018
Adjusting small aspects of the patient — and staff — experience in Ethiopia’s health facilities is leading to significant improvements in how the country provides health-care services.
SHARE

What impact can details have on customer experience? Restaurants focus on music, lighting, and furniture to create the perfect ambiance for diners to enjoy their meal. Airlines spend time measuring inches of legroom and degrees of reclining to ensure maximum comfort. Theaters measure viewing angles and decibels for the best acoustics. Attempts to improve health-care services in Ethiopia have taken the same approach: a patient-centered attention to detail that would lead to a complete overhaul of health facilities in the country.

The State of Ethiopian Health Systems

Government-run health facilities in Ethiopia outnumber private facilities by nearly three to one. Consequently, improving coverage and use of essential health services has been among the Ethiopian government’s priorities for decades. To find out where the facilities’ ineffectiveness lay, the Federal Ministry of Health and GHSC-PSM Ethiopia assessed every aspect of the health-care system from the ground up.

Implementing the new infrastructure, which was based on [the GHSC-PSM] study, will transform the country’s health service.

Despite the impressive progress made, Ethiopia still has high rates of morbidity and mortality from preventable causes. The quality of health care in terms of improving patient safety, effectiveness, and patient-centeredness, is often inconsistent and unreliable.

Following a review of baseline assessments and published studies, GHSC-PSM and the Ministry of Health organized four teams to assess 47 hospitals across Ethiopia. The assessment entailed a holistic examination of national health facilities, based on a philosophy of patient-centered design, that focused on easily overlooked details.

At each of the 47 facilities, the team carefully analyzed and scrutinized every variable — from patient flow to the number of doors and service windows. No stone was left unturned; they even considered the exact height of service counters — down to the centimeter.

The findings showed that patients had to enter three separate queues to get treatment: first to confirm their prescription, then again to pay, and once more to receive medication. Most facilities only had one door, serving as both an entrance and an exit. Facilities also tended to have just one or two service counters, all at varying heights and styles.

Varying counter heights led to additional issues, including general discomfort as well as difficulties for disadvantaged populations such as mothers, children, elderly, and disabled patients to access the facilities as intended. These issues had affected the staff as well: pharmacists were developing their own medical conditions, such as varicose veins, at facilities with tall counters that required long periods of standing. 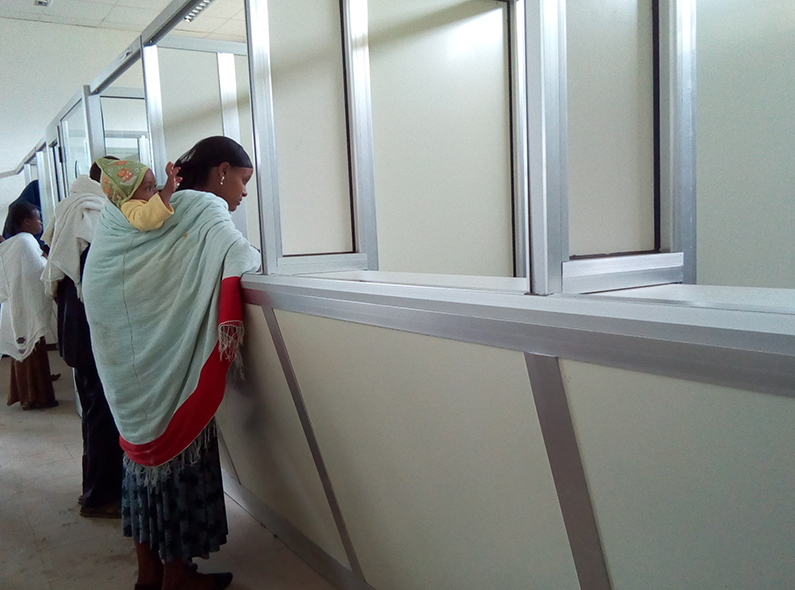 A Thoughtful Approach to Design

GHSC-PSM Ethiopia turned to two unconventional fields for help in sifting through the data: anthropometry and ergonomics.

By studying the measurements and proportions of the human body and applying ergonomic principles, the team developed a unified and consistent approach to maximize productivity, comfort, and usability at each step of the health-service process.

The resulting design called for two doors at each facility and merged the patient flow into one queue, minimizing confusion and maximizing efficiency. By reducing patient wait time — and thus increasing care time — the new design caters to 4.6 times more patients than the previous iteration. The study also found that nearly half of all patients sought service within a three-hour period on any given day, and thus the number of service counters per facility was set at 14 for a hospital that serves an average of 203 patients per day, to minimize patient waiting time even during these peak hours. 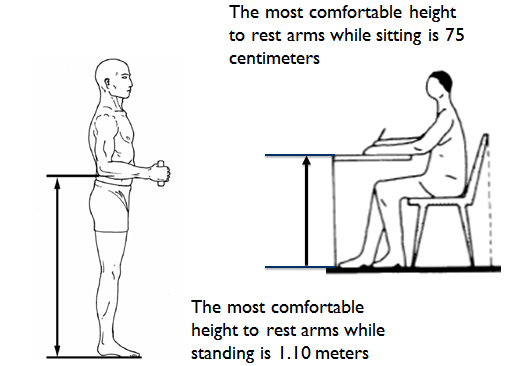 Furthermore, to avoid congestion with the new, consolidated queue, the space between the waiting area and counters was redesigned to be at least 2.1 meters, which would create sufficient room for one person to receive service while standing and two people to enter and exit the facility simultaneously. The counters themselves were designed to be multilevel, at a height of 75 centimeters for seated pharmacists and 110 centimeters for standing patients: heights that the study found the most comfortable for the average sitting or standing person, respectively, to rest their arms. This change resulted in 3.4 times greater patient satisfaction.

The team also developed standardized storage shelves at a height of two meters — the ideal height for the average Ethiopian to comfortably reach medicine stores. These shelves were also designed to house four months’ worth of stock, to improve availability nationwide.

Laying the Foundation for the Future

Ethiopia’s Federal Ministry of Health is committed to translating research into action. “Implementing the new infrastructure, which was based on [the GHSC-PSM] study, will transform the country’s health service,” said Regasa Bayisa, the director of pharmaceutical and medical equipment management.

The unified design became part of the larger Health Sector Transformation Plan, and will reach all regional states in Ethiopia by 2020. With technical assistance from GHSC-PSM, the design recommendations have been implemented in 65 health facilities across the country since 2017, with more underway.

While the focus on such details as counter height and shelf size may seem insignificant within the bigger picture of improving national-level health-care service, it shows an attention to detail and dedication to principles of patient-centered design that will leave a lasting impact on the people of Ethiopia.